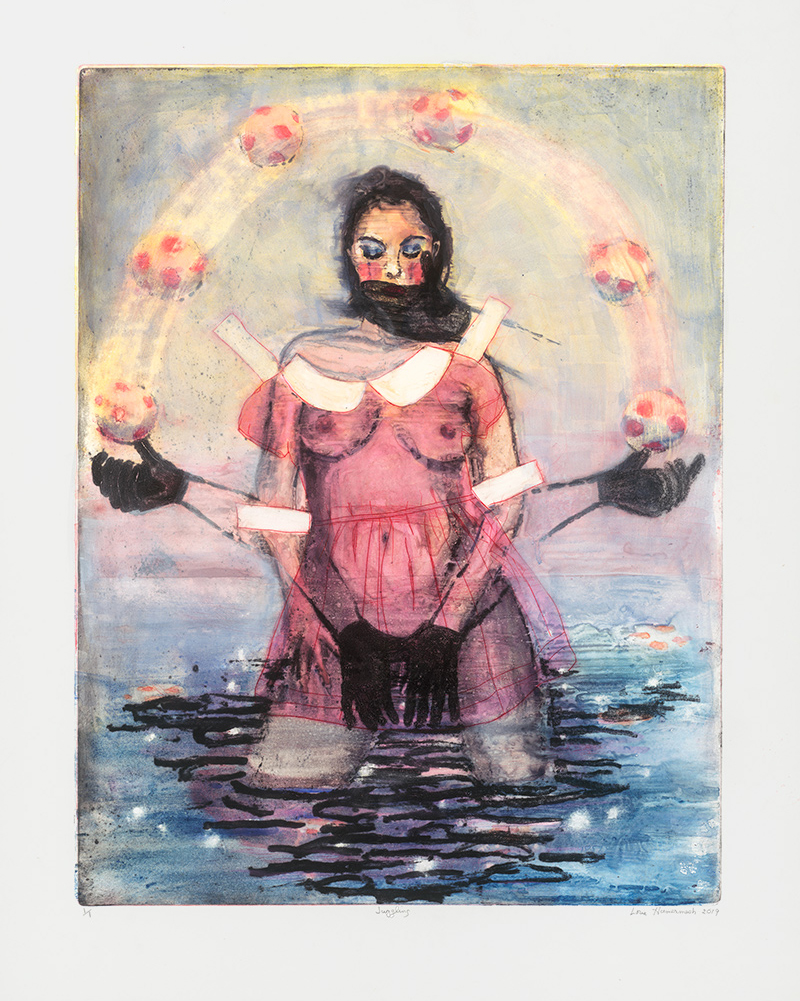 Lorie Hamermesh, after a fifteen-year hiatus, lays bare personal and universal emotions in an exhibit of recent masterful mono prints. Steeped in memory, her prints layer overlapping print medium and imagery, covering and revealing simultaneously. They evoke a sense of longing and melancholy facing shame . . . at last exposing what lies beneath.

The Renaissance artist, Masaccio, in his Expulsion from the Garden of Eden, depicts the original sin, when Adam and Eve become aware of their naked bodies. As they leave the garden in anguish, Eve covers her body with her hands, embarrassed of her sexuality, and thus, her need to conceal. Adam, although covering his eyes in shame, clearly feels no need to hide his nakedness.

The themes of budding desire, being halted by shame, permeate this body of work. The transparent layers of memory, however, give the work its mystery, both in acknowledging and revealing conflicting emotions. The viewer feels the anguish in Hamermesh’s documentation of trauma and shame, as well as her voice of acceptance and resolve.

Hamermesh’s palette is soft and muted, but her selective use of color charges her mono prints: red – passion and fear; pink – the female troupe, youth and innocence; and black – physicality and power.
What gives this body of work its edge is Hamermesh’s striking use of hands, with their importance emphasized by their multiplicity as well as their positioning. The arresting hands disturb the vulnerable openness of the figures. Layers of chine-collé and line combine with sensual color washes anchor the work, but the uniqueness of these prints lies in the use of transparency as a metaphor for exposure.

In Protect Me, a polka dot dress contains within it a similar smaller dress. The arms and hands in contrast, rendered in black, attempt to cover and conceal what would be the sexualized body parts, challenging the viewer to imagine what lies beneath. Is it internal or external forces that are the source of intense threat?

In Loss 1 and Loss 2, a child’s white dress is partially hidden by dark moody veils of watercolor, expressing loss of innocence and perhaps, beauty. The dress, printed over chine-collé paper of fading roses or candy colored dots, conveys purity and the desire to remain a “good girl,” while an inauspicious cloud spills a wash of sadness that tarnishes the innocence.

In The Juggler, the menacing hands are wearing black gloves. They cover the naked body that is exposed to the viewer under a see through dress. The ingénue is being prodded and silenced, but still manages to keep all of her twinkling balls spinning in the air overhead. Is she a victim of societal expectation or trauma?

Many of the dress images in Hamermesh’s work are reminiscent of the coloring book/paper doll figures of her childhood. Hamermesh is the product of an era of sexual repression of the 1950s and economic and political disenfranchisement of the 1960s. A baby boomer, she came of age during the 60s when the second wave of feminism was just hitting its stride. Yet in art, the male gaze was ever present. Painting was dead, as was figuration. Abstraction and minimalism gave little voice to women artists, who were not taken seriously. Fast forward to today, with the #MeToo and the Times Up movements that openly expose and confront sexual misconduct scandals, offering collective power for victims. It is the confluence of the political and the personal that imbues these prints with potency and force.

This exhibition of painterly mono prints reveals a woman who, over the years, has held fast to her truth, and now emerges timely and triumphant. Hamermesh, for years as a painter, examined her world, both the domestic and the psychological. By moving to printmaking, she manages to allow the viewer to experience the evolution and resolution of her inner life. We can identify with her as a child, daughter, sister, wife, mother and most of all artist, who reveals as well as evokes the female condition, asserting it with beauty and inspiration.

Her themes are universal struggles, not just personal ones.  It is moving to see these works uncover vulnerability and find voice. These prints defy long held expectations and emerge courageous. Lorie Hamermesh has taken her time and she gives us the gift of her thoughtful process.  No shame.